Sirenians squeak and squeal beneath the surface, lapping waters wet the land, sodden turtle footprints preserved in the thirst quenched earth, crocodiles snap at the incessant booms of the curassow, tails sway as five cats prowl under the canopy, its branches are shaken by the brown spider monkey, keen to be seen, not forgotten.

Watch our short film about our other Puro Coffee Colombian Rainforest Reserves.

“Annual deforestation rates are increasing in Colombia, and it was feared that El Silencio would be gone by 2025. However, FBC’s determined approach to conservation continues to protect the wetlands and forests of El Silencio, and is empowering local communities to tackle their own challenges. By extending the reserve, FBC can now protect more of this precious landscape and its remarkable threatened wildlife.”

Biodiversity:
The middle-Magdalena Valley hosts a variety of unique species. It accounts for ~20% of the species of Colombian birds (345 species, 4 endemic), 33% of the bats (58 species), ~21% of ants (~180 species), 4% of the vascular plants (723 species, 1 endemic) and 6% of the amphibians (42 species, 3 endemic), as well as a high diversity of rodents (27 species) and primates (6 species, 1 endemic, 2 near endemic). However, only 10-15% of the original ecosystems remain and many of the species in the area are threatened, with several being critically endangered. This project will protect important habitat for endangered species such as Lorenzo’s Salamander (Bolitoglossa lozanoi, DD), Magdalena River Turtles (Podocnemis lewyana, CR), American crocodile (Crocodylus acutus, VU). The endangered primates and forest birds will also have more and better connected forest area – this includes Blue-billed Curassow (Crax alberti, CR), the Variegated Spider Monkey (Ateles hybridus, CR), Varied White-fronted Capuchin (Cebus albifrons, EN), the White-footed Tamarin (Saguinus leucopus, EN) and the Grey-handed Night Monkey (Aotus griseimembra, VU) as well as 5 cat species (Jaguar, Puma, Ocelot, Margay and Jaguarundi). This all captures a unique ecosystem where all these species come together – Barbacoas is one of the few places where Saguinus leucopus exists sympatrically in one place with the other primate species, i.e. only on the west side of the Madgalena river. 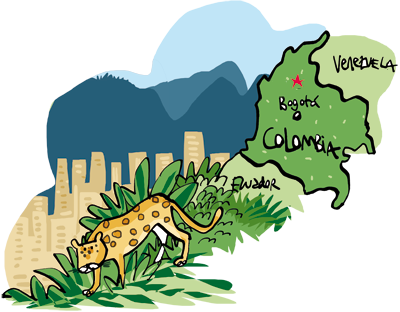